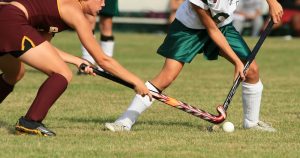 Field hockey, like many other sports requires a combination of speed, agility and endurance. It is this continuous running coupled with rapid side to side movements and changes in pace that are responsible for many of the lower limb and foot injuries frequently seen in hockey players, and often seen at my FootDr podiatry centres.

There are two main classifications when it comes to hockey injuries; acute, which occur suddenly during activity, and overuse which result mostly through repetitive actions where incorrect alignment and posture of the lower limbs or feet causes injury. The repetitive actions of hockey coupled with foot or knee joint misalignment increases stress on surrounding muscles, tendons and bones therefore making you more prone to injury.

Along with alignment factors, the artificial turf in which hockey is commonly played on can be a contributing factor to many overuse injuries, as like running on road, shock absorption is decreased on this surface. Therefore shoes and insoles with good support and cushioning properties are very beneficial in reducing the chance of injury.

As you can see, chronic injuries far outweigh acute injuries, however chronic injuries will stop you playing and enjoying hockey if you do not look after the problem. This is why you should see a podiatrist as soon as possible when you notice any lower limb or foot pain.