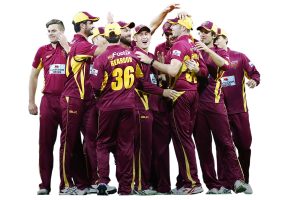 As the official podiatrists for Queensland Cricket and many international players, as well as developing Custom Cricket Shoes for over 12,000 cricketers, we know a lot about cricketer’s feet.

Cricket is a tough game for your feet and legs, with huge forces being transmitted through the feet in fast bowling and the long hours spent standing in the field. Despite cricket being a non-contact sport, it has an extremely high injury occurrence:

Some of the most common injuries our Podiatrists see in cricketers include: 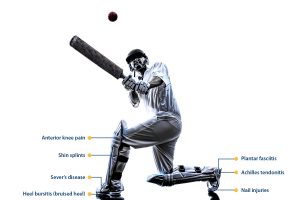 Heel and arch strain is very common in cricket in all player types. It can be caused when bowlers land heavily on their front foot, in batters that stand and run between wickets on hard pitches, and fielders that often stand for hours at a time. Players that have both lower or higher than normal arch heights, or have feet that pronate (roll in) excessively are at greater risk of developing plantar fasciitis heel pain.

Plantar fasciitis can be a very debilitating condition and if not treated soon enough or appropriately can lead to significant time off the field. Treatment with custom foot orthotics, plantar fascial splints, footwear modifications including spiked up cross trainers, and stretches and strengthening exercises are often very successful treatments, and many of our players are back on the field in just a matter of days.

Sever’s Disease, medically referred to as calcaneal apophysitis, is a self-limiting, growth-related and extremely debilitating condition affecting the back of the heel where new bone is added for growth. It affects younger players aged between 10 and 14 years old and results in pain during and after the match. The pain is often so severe that players miss an entire season.

If your child has heel pain after or during sport, it might be comforting to know that soft custom foot orthotics (designed with heel raises specifically for this condition) worn with appropriate cricket shoes and coupled with stretches is a very effective treatment. Make an appointment with your My FootDr Podiatrist as early as possible, as this can become a chronic condition if left untreated.

Strain from overstretching, tearing or rupturing the Achilles tendon is a very common cricket injury that we see and treat. Although the Achilles is the thickest and strongest tendon in the body, it can be strained by chronic overuse, particularly in players with low arches and flatter (pronated) feet. Appropriate footwear, Custom Cricket Shoes modifications and foot orthotics coupled with eccentric strengthening and stretching exercises are paramount in the treatment of this condition. This is because these conditions are chronic in nature and likely to recur if the underlying biomechanical problems are not addressed.

Acute strains of the Achilles are also common in fast bowlers who sprint for several kilometres per day. GPS data showed that Mitchell Johnson sprinted over 23 kilometres in distance, reaching speeds in excess of 33 km/h on the first day of the Boxing Day Test in 2013.

Older batters with tight calf muscles are most at risk of developing Achilles injuries and we have treated some of the best international top-order batsmen who said they could have prolonged their careers a few more years if they had been treated sooner.

Stress Fractures of the Foot & Leg

Stress fractures are overuse injuries and can be complex conditions to treat. Important treatment components include:

Repetitive microtrauma with the foot landing in an awkward position over many overs increases forces through the bones in the foot, particularly the navicular and metatarsals. Bone constantly attempts to remodel and repair itself, especially when extraordinary stress is applied, meaning that fast bowlers who land heavily on their front foot during the delivery stride are most at risk. Too many overs, insufficient recovery, and bowling technique can also all play a part in the development of stress fractures of the foot and lower limb.

Stress fractures of the spine are also common in fast bowling due to poor technique with “mixed” bowling actions and counter-rotational stresses and loads transmitted for long spells, especially in the lumbar vertebrae on the non-bowling side of skeletally immature bowlers (under the age of 25). In older bowlers, however, lumbar intervertebral disc compression and osteoarthritis are more common.

Shin splints are caused by overstraining the muscles in your leg that attach to the tibia (shin bone) due to overtraining, insufficient rest and running on hard surfaces with faulty lower limb biomechanics. Well-researched causative factors include a flatter foot type (overpronation), a very high arched foot type (over-supination), non-supportive and inappropriately cushioned cricket shoes, increasing your training too rapidly at the start of the season, lack of ankle joint range of motion, and tight calf & hamstring muscles.

Shin splints are grouped by their anatomical location and are described as anterior, posterior and lateral. Posterior shin splints are common in cricket and caused by overuse of the tibialis posterior muscle and also its tendon. As the main muscle that dynamically supports the arches of the foot, flat feet and pronated feet are the main biomechanical cause. Foot orthotics are often required to improve foot posture and biomechanics and work very effectively.

Poor knee flexion or gluteal (buttock) control and core stability, along with weakness in the quadriceps and intrinsic foot muscles that decelerate forces are also implicated, therefore podiatry combined with physiotherapy can be very useful in treating shin splints.

This condition affects the anterior knee joint which consists of the knee cap (patella) and the lower end of the thigh bone (femur bone). It is medically referred to as Patellofemoral Syndrome, and occurs when the patella does not glide properly on the lower end of the femur due to anatomical anomalies, or quadriceps weakness and can cause acute to chronic pain in cricketers of all age groups.

If the patella does not glide up and down in the groove it can cause bone on bone rubbing and/or degeneration of the cartilage. Poor biomechanics can be remedied with foot orthotics, cricket shoe modifications and muscle strengthening programs.

Another common cause of pain in the front of the knee in fast bowlers, is patella tendinopathy, or jumper’s knee, as the greatest amount of force translates through the patellar tendon whilst jumping and landing. The patella tendon connects the kneecap to the tibia or shin bone. At first, the pain and stiffness in the front of the knee may only be minor but as the tendon is repeatedly strained, the lesions occurring in the tendon can exceed the rate of repair. Tendon cells can repair early on but the damage will progressively become worse, causing pain and dysfunction. Eventually, chronic damage leading to tendon cell death and even catastrophic rupture can occur.

If you have pain in the front of your knee just below the knee cap, you should contact your My FootDr Podiatrist as soon as possible. Treatment involves biomechanical assessment, rest, ice, a patella tendon support, foot orthotics if poor foot posture is implicated, shockwave therapy and very importantly an eccentric strengthening program.

Sometimes just a change in footwear and some quad strengthening can make a big difference.

Trauma to the toenails, especially the big toenail, is a common problem in cricketers. We have kept some of the world’s best fast bowlers in the game by addressing something as simple as toenail treatment. Periodic nail debridement and alteration to the cricket shoes by cutting out a section of the upper adjacent to the hallux toenail, and reinforcing this with kangaroo leather, can make a vital difference to a cricketer’s foot health.

How Can We Help

At My FootDr, we love cricket so much that we were the naming rights sponsors of the legendary Queensland Bulls for 4 seasons from 2014 to 2018. Our podiatrists have a deep knowledge of cricket injuries and we have a special offer for junior cricketers in association with Queensland Cricket.