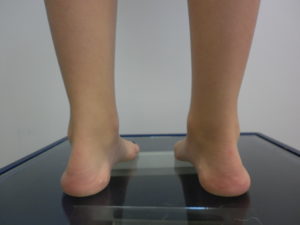 Often referred to as pigeon-toeing, in-toeing describes an alignment where instead of facing straight ahead, the feet turn in to face one another. In-toeing can range from mild to severe. While the position itself is often painless, it can cause problems with repeated tripping and falling, as well as musculoskeletal pains in the feet and legs.

It’s not uncommon for young children to in-toe in the early years of their walking, especially around three to four years old. They may even progress from in-toeing to out-toeing, before the feet straighten.

When no other pains or problems are present alongside in-toeing before the age of seven, in-toeing may not be a concern. When in-toeing presents alongside pains, aches, incoordination or other symptoms, this is a cause of concern for many parents, and an assessment with a podiatrist is advised.

If in-toeing persists beyond the age of seven, an assessment is recommended. This is because there is a greater risk that the feet will not straighten on their own, and assistance is needed. In recent years, our podiatry team has seen a higher prevalence of in-toeing among adults, likely as a result of unmanaged in-toeing in childhood. 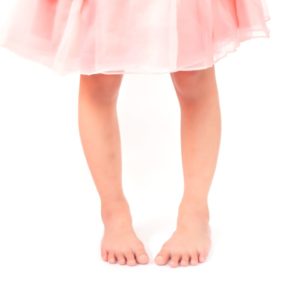 When in-toeing is present at birth, it may be metatarsus adductus. Here, the foot will resemble the shape of a bean, where the front half of the foot bends inwards on the back half of the foot. It occurs in approximately one in every 1000 births and often resolves over the first few years with a little help. The foot may be flexible (can be manipulated and straightened with the hands) or inflexible, with the latter generally being more challenging to manage.

When the shin bone (tibia) twists inwards, therefore twisting the foot inwards, this is medically known as tibial torsion. Often, this position is associated with the position of the lower limbs in the womb, and corrects itself before kids start attending school. If this position persists, we can often help encourage the shins to rotate externally, thereby straightening the feet.

How is in-toeing treated?

We manage in-toeing by encouraging the foot and leg to rotate outwards to a straight alignment. We do this using:

Gait plates are a very specific type of orthotic designed to encourage the foot to rotate outwards. They are worn in the shoes, and are well-tolerated by children.

Good shoes can help support and stabilise the foot and lower leg as it rotates outwards, while supporting the function of the gait plate.

Physical therapy can prepare and assist the muscles in their new position. Tight muscles can be stretched (like those around the hip that may be turning the femur inwards). Weak muscles can be strengthened to help maintain the new front-facing foot and leg position, while supporting balanced lower limb function.