We’ll take on the major sponsorship of the Bulls for the 2014-15 and 2015-16 seasons as part of an expanded presence with Queensland Cricket that will also include the Konica Minolta Queensland Fire and Premier Grade cricket. As part of the sponsorship we will also be looking after all the foot care needs of the players including providing custom made cricket shoes.

Read the official press release below…

The Queensland Bulls will put their best foot forward for the next two years with the announcement today of a milestone major sponsorship.

Queensland based podiatry group my FootDr™ will take on the major sponsorship of the Bulls for the 2014-15 and 2015-16 seasons as part of an expanded presence with Queensland Cricket that will also include the Konica Minolta Queensland Fire and Premier Grade cricket.

My FootDr™ was a foundation sponsor of the Brisbane Heat and will maintain that association as part of the expanded arrangement. 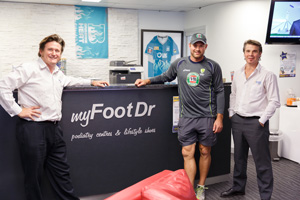 Long-time backers XXXX will remain as the Official Beer of Queensland Cricket, continuing a 20 plus year partnership with the sport in this State.

The Bulls will carry the my FootDr™ logo on their playing and training apparel during the Sheffield Shield and Matador BBQs One Day Cup competitions.

The company will also expand its professional services to include all Heat, Bulls, Fire and Queensland youth players and encompass foot and lower limb screenings, specialised orthotics and spiking and other cricket shoe modifications.

Founded in Bulimba in 1992, my FootDr™ has grown into Australia’s largest and most trusted podiatry group, providing foot orthotics and podiatry treatment to roughly 100,000 patients across 20 clinics in Queensland and abroad, including pioneering podiatry in Singapore, Jakarta and China.

“my FootDr™ has already established itself as outstanding in its chosen field, and our players and staff cannot speak highly enough of their efforts from our involvement so far,” he said.

“They are a hard-working, innovative and enthusiastic team and we see them as an excellent fit with The Bulls,” he said.

“It is great to be a part of a local success story like theirs and we’re delighted they have chosen to back Queensland Cricket with such a significant level of investment. The benefits to the game here, both at an elite and a grassroots level, will be significant,” Cockerill said.

Mr Cockerill also paid tribute to the role XXXX has played in the development of cricket in the state.
“XXXX has been a wonderful supporter of Queensland Cricket for more than 20 years, at both a major sponsor and grassroots level, and we look forward to continuing our great relationship with them,” he said.

“It’s very satisfying to know that we are making a difference to comfort levels and reduced injuries for these guys, so that some of the world’s best cricketers can do what they do best!. We are really looking forward to the next few seasons working with such an iconic Queensland sporting team.” said Dower.
“We really enjoy treating The Bulls, Heat and Fire players, and it’s rewarding to see their enthusiasm and gratitude for our services. It’s great to be contributing more than just dollars to Qld Cricket and we want to reach grass roots players as well so that the next generation of Queensland Cricket players are comfortable, injury free and in the best possible shoes to optimise their performance,” Stewart said.