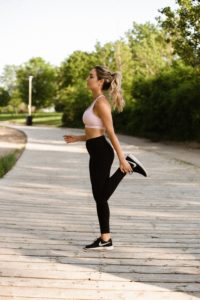 As a My FootDr podiatrist, the phrase “I get [insert body part] pain during or after running” is something we hear daily. Just when you’re feeling motivated to start or continue running, a painful problem rears its head and can halt your progress or stop you in your tracks completely.

This week, we asked five of our podiatrists what pains stopped their patients from running – and got them to elaborate on why it happens (and was happening in their case), and how we’re helping them overcome it. If you have any questions about these or any other problem you’re experiencing while running – let us know!

In any 12-month period, up to 70% of runners will sustain an injury from running – and 42% of these will be to the knee. Our patient came in experiencing pain on the outside of their knee that would start during running and continue to remain tender after rest – although the pain wasn’t as severe then. They suspected they had a condition called runner’s knee (and we don’t blame them with that name!), but we take no guesses here, and after a comprehensive assessment, it turned out they were suffering from iliotibial band (friction) syndrome (ITBS).

ITBS involves a thick connective tissue called the iliotibial band (ITB) that runs down the outside of your thigh and connects to the top of your shin bone (tibia). Simply put, when you partake in sports that repetitively (and forcefully) bend and straighten the knee just like in running, the ITB can rub against the outside of the knee, irritating the band until damage to the connective tissue fibres occur – bringing with it pain and swelling.

Our treatment plan for this patient – as for any patient – focuses on not only relieving the pain and helping repair the existing damage, but also addressing the cause to help prevent it from happening again in the future. For this gentleman, this meant using custom foot orthotics to help correct the alignment issues at his feet and legs, thereby reducing the strain on his ITB. We have created a stretching and strengthening program as his ITB was significantly tightened and we identified some contributing muscle weakness, we’ve temporarily modified his training schedule while his ITB heals, and we may also work on his running technique – something that was difficult to assess in the first appointment as his pain was causing him to forego his normal running style to try to minimise the pain.

Before we start with this patient, we thought we’d emphasise that you don’t need to be a runner to develop heel pain. In fact, we see just as many people with heel pain that have no desire to run as we see those who are active participants.

For this active lady who is new to exercise, her heel pain wouldn’t rear its head during running – but when she’d rest after a run and then go to stand up again. The pain was sharp, shooting and stabbing – and then would ease after she continued to walk (or limp) around her home. It wasn’t long before these symptoms were developing first thing in the morning as she’d get out of bed – which is the point where she decided she couldn’t put up with it any longer.

Our assessment showed pain at the insertion of a tissue called the plantar fascia at the bottom and inside of the heel. Thankfully, her symptoms and presentation were still mild to moderate, indicating that the damage to the fascia hadn’t yet progressed to a tear – which is always a win in our books as it’d make recovery easier and faster for her.

Her treatment involves switching from flimsy joggers to good running shoes (we gave her a list of appropriate shoe recommendations and those were her choice!), supporting her flat feet and improving her biomechanical foot function using custom foot orthotics, and helping to speed up the repair the of fascia using shockwave therapy.

Your calves are very important when you run – working up to 25% harder than your quads when running. When you need to stop or quickly change direction, they’re the ones that help you do so safely without injury. They help to stabilise your knee and absorb a large amount of force when you run. Hence, runners with calf pain is a common occurrence around here.

This patient is training for his first half marathon, and is doing so by running around his neighbourhood, varying lengths and times according to a schedule that he was given. When we explored this further, we found that he lives in a very hilly area – which he sees as a benefit to his training – but also means that he starts every run with a massive climb, and proceeds to spend almost 75% of his run just going up and down hills. As he was increasing his distance, speed and time running, this man was simply overloading his calf muscles to the point of damage, especially as he hadn’t done much hill work or specific calf strengthening previously.

Treating these calves is involving a very detailed calf strengthening program so that his calves can eventually handle all of the uphills, actively working on his flexibility as we noted he had an early heel lift and a twist on his foot from a tight Achilles tendon, and modifying his marathon training program so that he can continue to train while not causing the onset of calf pain.

This gentleman came to us describing a stiff and painful feeling in his shins that would start 10-15 minutes into his run and would settle after he stopped running. While shin splints was his initial thought about what the problem could be – after his detailed assessment, we noted that his symptoms were consistent with both shin splints (specifically medial tibial stress syndrome) as well as a stress fracture to his tibia.

We don’t believe in guesswork – so referred him for medical imaging to confirm his diagnosis. The winner? It was shin splints and it was affecting his leading leg due to the force on the (unrepaired) muscles and tissues during running.

Treating this particular case started with reinforcing the importance of a good warm-up, cool-down, and stretching. Especially getting the muscles ready before a big run – which as it turned out, he had been heavily neglecting previously. We taught him a series of stretches and gave clear instructions. Next – new shoes. He’d had good shoes, but they were about three years old and the inside edges were so worn down that they were tipping him inwards – very noticeable even when standing in the shoes. Finally, we recommended custom foot orthotics to help his foot posture and better control his inwards rolling (pronation) and therefore foot function.

Our last case was something a bit different – painful toenails – and this was a bit of a funny one. This lady was running approximately two times per week, and otherwise staying active with the gym and social soccer, which she loved. The skin around her left big toe was red and swollen, and the second toenail on her right foot was definitely bruised.

As it turned out, her soccer boots were way, way, way too tight. Which she knew, but thought it was okay given that she was in them for comparatively short periods during soccer games and training sessions. What was actually happening was that on her right foot, her second toe was her longest, and was constantly hitting against the boot (and ball!), leaving it bruised and tender regularly – including in other shoes when she went for a run. On her left big toe, the tight boots had led to her toenail piercing the skin – and an ingrown toenail developing. Even worse, the ingrown nail had become infected, contributing to her discomfort.

The first part of the treatment was obvious – getting new well-fitting soccer boots ASAP – which were measured to her longer right foot and to her second-longest toe, in the afternoon when her feet were at their biggest, and with the same thickness of socks that she normally wears when playing. For the ingrown toenail, we booked her in for a partial nail avulsion to permanently correct the ingrown toenail – especially as that nail had become ingrown at least three other times over the last six or so years.

So, what’s stopping you from running?

If you’ve got a pain or problem during or after running, whether we’ve mentioned it above or it’s something completely different or unusual, we’d love to help. Treating foot and leg pain is what we do! And we have the best technology, skills and experience to allow us to do it excellently.